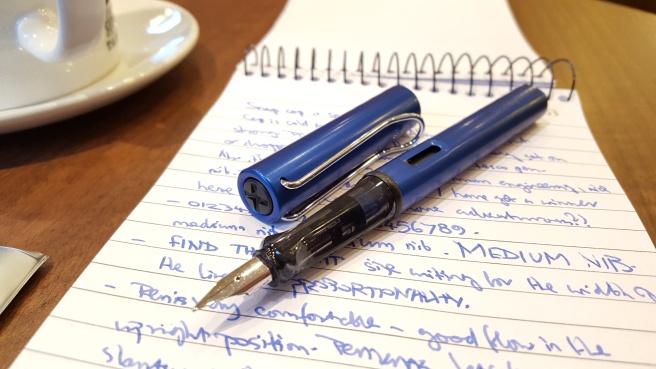 Thank you to everyone for their suggestions and sympathy, with regard to my pen case dye-stained, yellow and pink Lamy Safaris (Pen cases: a cautionary tale, 5 January 2017). I have not yet found an antidote. I have not given up hope of restoring them but am yet to find an economical remedy.

Both the yellow and pink Safaris are still available to buy in my local shops and so it would be a quick and easy matter to throw some money at the problem and replace them both. But if I were to do that, would I then throw away the stained barrels and caps and forget them? I don’t think so. And even if I did, I suspect that I would remember them every time I looked at their replacements.

Both of the pens are still usable with their black stained barrels and caps, at home at least. It seems wasteful to throw them away.

I pondered these things in my heart as I gazed at the Lamy rack today. Eventually however, I was won over by the idea of not trying to replace them but rather, of compensating myself with a shiny new Lamy AL-star in vibrant metallic blue, which had caught my wandering eye, a few pens along the row. I rather liked the idea of using it with Omas blue ink which seemed equally vibrant. So I went with the AL-star option.

A few doors away, is a nice coffee shop on the high street, where I then sat with a Regular Mocha and examined my new purchase. I guiltily entered it on my app database of fountain pens, not unaware that this was my first pen purchase of 2017 despite my resolution to ease back on the pen-buying,  after the shock of 2016’s end of year tally.

Guilty thoughts aside, I unscrewed the barrel, popped in the  supplied Lamy blue cartridge and pushed it home. I had a reporter’s ruled spiral notebook in my bag and was eager to try the pen. To my pleasure and delight, ink started to flow within a couple of touches of pen to paper and was one of the most silky smooth, new pen experiences in recent memory. The royal blue ink glistened under the bright spot-lamps in the coffee shop ceiling.

One of life’s pleasures, I think, is to sit in a coffee shop, watching the world go by in the busy high street outside the window and the comings and goings within, with a nice pen and notebook on the table before you.

I made the observation that the ink drying time was around the five second mark on that paper. I was very happy with the ink flow. Sometimes, these nibs are said to be on the dry side but mine seemed to be tuned to the optimum balance of lubrication, smoothness and drying times.

I also observed, when writing a few lines with my Sheaffer Sagaris, filled with Caran d’Ache Idyllic Blue, that the colour was not wildly dissimilar from the Lamy blue ink in the cartridge, which is also a very uplifting royal blue.

And so, with the upset of my disfigured Safaris behind me, a new chapter of blue AL-star ownership begins. And I have broken my 2017 pen fast already, even before the sun had set on the fourteenth day.

2 thoughts on “AL-star pick me up”