I have not always been very lucky with Cross pens. I find that the nibs can be a bit hit and miss. Some years ago I bought the Apogee, in black, thinking that it would be “the one”, the lifetime companion. Perhaps this was unrealistic, but I became a bit irritated by the amount of sideways play in the sprung clip. Then when unscrewing the barrel, instead of the barrel coming off, the collar of the section rotated loosely instead. Finally, it suffered from “ink starvation” and would not make it to the end of a page. I gave up. I know that they have a lifetime guarantee but I didn’t bother and just wrote with something else.

I have the Aventura (black again) which came with a wonderful steel medium nib – the sort that just works beautifully without any aggravation within seconds of having a cartridge inserted. But for me, I was not a fan of the chrome finish grip section nor the oddly and pointlessly truncated design of the barrel end, which put me in mind of a passport that has expired and had a corner cut off.

I have since had a nice Bailey, also in black, which I prefer although I had to work on the nib a bit at first, to get a wetter, more lubricated flow. The thick steel nibs are difficult to bend. If anything, it is a little too wet now, but good for more challenging surfaces such as thick sketch book paper.

I had seen the Cross Century II on special offer a few times, in a set with a ball-point pen, in matching black lacquer and chrome outfits. I had handled the fountain pen but initially been put off by the thin section.

However, when I saw a fountain pen for sale on its own recently, in gleaming black lacquer with chrome cap, I gave in and bought one. Certainly the metal cap, with fine guilloche scrollwork is very appealing, especially under the spot lamps in a shop display case. Then the medium nib, in stainless steel but long and slender, again with fancy scrollwork is also very attractive.

Yes, the section is narrow, although it has ridges to help with grip and it is of a resin or plastic material and not slippery chrome. The Century II has a wider section than the Century classic.

Examining the section more closely, I was very surprised to find that it is actually translucent, with a dark blue tint, when seen with an illuminated x7 loupe (as you do).

One great thing, for me at least, with Cross pens is that the date of production is stamped on the metal ring, where the cartridge goes. Mine, although purchased in November 2016, bore the date 0415. I love it when pens are dated.

The cap is a pull-off type, and with a good firm grip, but without being too hard to remove, (as I found with a Bailey Medallist rendering it almost unusable). Having a secure cap is great for an EDC pen, so it won’t come loose in your jacket pocket. The cap also seals the nib well and I have had no problems with hard starts.

The pen measures 123mm open, which even for my medium to large hands, is ok to use without posting, but I do prefer to post for the extra length, weight and sheer beauty of the combination of black lacquer and chrome. The cap posts nice and deep and grips the barrel well and gives an overall length of 155mm.

Another plus, is the fact that it takes the screw-fit type of Cross Converter, which fits very snugly and securely into the section. At present mine is filled with Parker Quink, black ink, which although has been hanging around the house for several years, still performs beautifully in the Century II with a nice dark line, wet flow, good lubrication but not too slow a drying time and a little bit of shading.

But perhaps best of all, as I am noticing as I become more discerning in my fountain pen journey, is the lovely feedback from the nib. This is hard to put into words. It is smooth, but it delivers a lovely sensation of nib-on-paper as you write, a faint sound, not a scratchy sound but a gentle play of well-designed metal on the page. This is what fountain pen use is all about and is what sets the fountain pen apart from a ball point pen – this effortless gliding of pen on paper and the glossy trail of freshly laid ink in its wake.

The pen is a joy both to use and to look at. It is smart enough for business use without being showy but dainty and elegant for social use too. Perhaps the narrow section might not be well suited to lengthy writing sessions for people with larger hands and I have yet to put this to the test. But there is something about the narrow section and slender barrel which creates a feeling of using a precision instrument.

Rumour has it that HM The Queen uses a Cross Century.

Perhaps this could be “the one”. 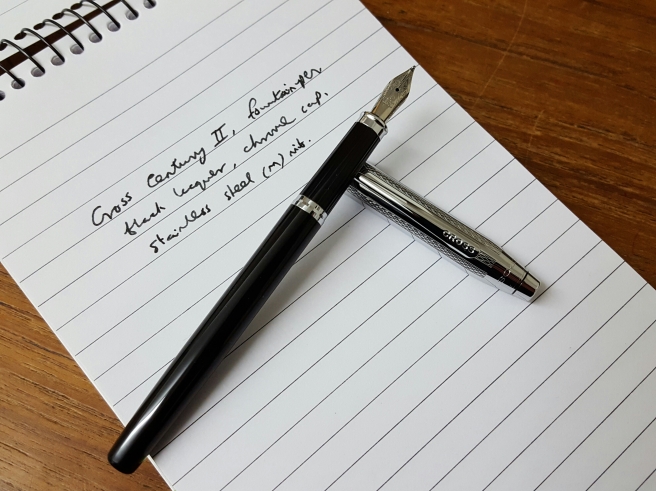