This is not so much a review, as an admission that our first impressions are not always correct and we can change our minds about pens.

The Lamy Studio is a pen that, for a long time, I did not think I needed. Certainly, I liked the idea of the pen, namely a nib of a Lamy Safari or AL-Star, but housed in a more business-like and slightly more up market body. I do possess numerous colourful Safaris and several AL-Stars, as they are good value, decent sized without posting and perform well, despite my not being a fan of the faceted section.

So when I first learned of the Studio, having all the benefits of the stainless steel nib that I like but without the faceted section, I was quite keen. But then I handled the pen and was put off by the shiny chrome tapering section, which I could imagine being slippery to hold. Apart from that, when handling the pen in a shop, I noticed that the rim of the cap seemed rather sharp (almost as though you could use it to cut holes in leather) giving the impression that it was unfinished.

So I was able to put the Studio out of my mind quite easily, without hankering to own one.

However, fast-forwarding several years, I realise now that not all Studios are equal. Whilst the dark Imperial Blue or the Black versions (named the 67) have the shiny chrome section, there is also a steel version with a black section (called the 65).  And whilst I had assumed these to be priced the same, it transpires that the steel version without a chrome section, actually costs a little less.

When in our local WH Smiths recently, I saw the steel Studio offered for sale at just £39 and decided to take a closer look. And there I discovered that the black grip section on this model is not finished in metal but in a rubbery material which is not at all slippery. And so for this modest outlay, I gave it a go.

First, about the grip: I cannot tell you exactly what it is made of. It could be a plastic with a soft-touch finish. But I rather suspect that the rubbery feel might be formed from a thin transparent skin of silicone or similar synthetic rubber. I have another fountain pen with a similar feel to the grip, an old Parker Frontier in brushed stainless steel finish, which served me well for several years, but the grip material eventually wore away in places, leaving a very smooth (and slippery) plastic underneath.

So the Studio 65 might have a similar material. If so then a more normal moulded plastic, perhaps textured like some of the Safaris, (but without the facets) would I think have been preferable.

But the purpose of this post is to say that I have been using the Studio now for several weeks, and am finding it to be great as a day to day work pen and an EDC. It is comfortable to hold. It is pleasant to use either posted or not posted. Yes, the rim of the cap is a bit thin and sharp but I appreciate that this is a consequence of the pen having a cap which is perfectly flush with the barrel when capped, and with just a minimal step down from barrel to section when the cap is removed.

Any post about the Lamy Studio would not be complete without some mention of the pocket clip. It is attractive and unusual and sometimes described as being like a blade of a propeller (although this is not strictly correct). It is appealing to look at and does well at stopping the pen from rolling on a flat surface. But as a pocket clip, (to actually clip the pen into a pocket) it is awkward to lift over material. It does not bother me as I carry it in a pen case. Some may like it but I fear that it was a triumph of looks over function.

Having said all of that, I do enjoy using the pen. I found recently that I had accumulated a dozen or so pens over the years with an all steel finish, including the Parker Frontier mentioned above, but I think that this Studio 65 may prove to be my favourite of these, in terms of size, writing performance, reliability and comfort. 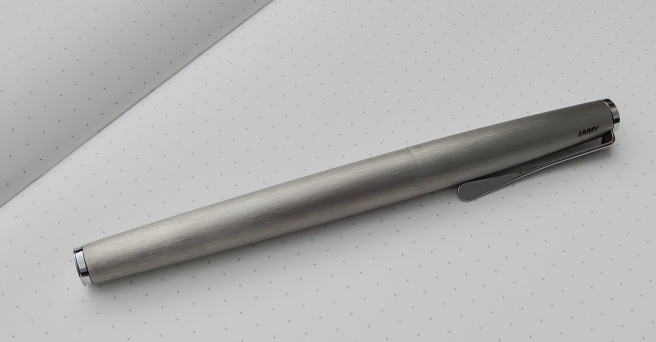 4 thoughts on “A fresh look at the Lamy Studio 65 fountain pen.”