I know well the pleasure of receiving a new fountain pen. There is an element of risk as sometimes the pen might not live up to expectations and the initial excitement can turn to disappointment.

The Kaweco Dia 2 had been on my wish list for over a year. Eventually I succumbed. This was in part triggered by my recent experience of the new Kaweco Perkeo. I fully appreciate that the Perkeo is an inexpensive, entry level pen. I do not like to be negative about it and would feel awful if anything I wrote caused anyone who had just received a Perkeo, to like it any the less.

I liked the nib of the Perkeo and it certainly has a place as a robust, reliable, decent quality writing tool. But I came to realise, as I looked again at favourable reviews of the Kaweco Dia 2, that the various aspects of the Perkeo that I liked less were all remedied in the Dia 2 and that perhaps this was the pen for me.

I did not have the opportunity of handling a Dia 2 before buying, as I do not know anyone nearby who owns one and they are not found in the shops here. Paperchase do sell Kawecos but these seem to be limited to the Sport models including some aluminium and brass versions, (and now the Perkeo too).

I ordered my Dia 2 from Cult Pens and enjoyed their excellent service as usual. I received the pen on a Friday evening, with the happy prospect of a weekend ahead to get acquainted with it.

To get to the point, the pen is simply gorgeous. I have seldom been so thrilled with a new pen (and I have bought a few).

Admittedly, a fountain pen, like a wristwatch, is a personal thing and what appeals to one person does not appeal to everyone. But as someone who appreciates nice quality design, features and materials in a fountain pen, I found lots of detail to enjoy in the Dia 2 and very little to dislike. It seems to embody an excellent compromise, of being not too heavy, not too light, not too large, not too small, not too cheap and (dare I say) not 2 dia.

The pen is based on a classic design from the 1930’s. What immediately impresses, is the glossy black finish, with contrasting chrome coloured fittings, the classic subtle beauty of the shape, the gentle curves to the cap and barrel and the section where the pen rests comfortably on your finger as you write. Also the elegant knurled end caps and metal Kaweco badge at each end.

My pen arrived in a smallish black, hinged box with a push-button catch and a cushioned white satin interior, like a jewellery case. This was in a cardboard sleeve, with the Kaweco logo and slogan “License to write, Germany since 1883”. However I have heard the pen is sometimes packaged in the Kaweco tin instead (which I am familiar with, from purchasing a Kaweco Al-Sport). 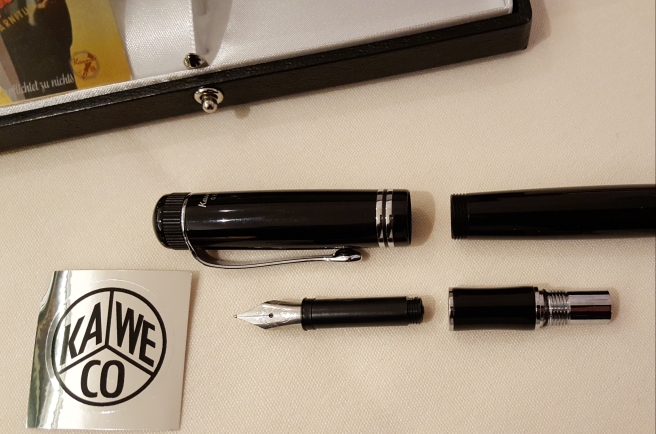 The Dia 2 is a black, cartridge-converter fountain pen, taking standard international cartridges with a stainless steel nib. There is a 14k gold nib unit available. There is an option of the chrome coloured fittings, or gold coloured at a little extra cost. In the hand, the pen feels reassuringly solid, beautifully balanced and particularly tactile. It wants to be picked up.

The pen measures (approximately) 133mm capped, 124mm open (not counting the raised badge at the end of the barrel) and 158mm posted. I weighed it at 28g (including two cartridges on board) of which around 18g is the pen unposted and 10g is the cap.

For me, this puts the length as being adequate to use unposted, although it is a little shorter unposted than the generous 130mm of a Lamy Safari or AL-Star, or the 135mm of my Cleo Skribent Classic. However, I do prefer to use the Dia 2 posted. It still feels nicely balanced this way, is not too long or back heavy and has the advantage that you can put it down on a desk without it rolling off.

The stainless steel nib is part of a unit, which unscrews from the section when you want to clean it or swap nibs (rather like a Pelikan). Spare nib and feed units are very affordable, and available from Cult Pens in EF, F, M, B and BB widths. Currently these are priced at £8.40 each except for the Extra Fine or Double Broad which are £10.49. There is also a 14k gold option for £99.00, (all widths) if you want extra luxury.

I have been genuinely delighted with my Dia 2. I ordered mine with a Fine nib, in stainless steel. I tried this for a day or two but found mine a little skippy and not as effortless as it should be. Perhaps it just needed tweaking or running in but I was impatient. I then swapped this with the medium nib unit from my Kaweco Al-Sport, the shiny aluminium one, that looks stunning but which I find slippery to hold. With the medium nib installed, the Dia 2 came into its own and wrote superbly.

Nothing is perfect but, being reasonable and taking account of the moderate price tag, I cannot really think of many improvements that could be made. To summarise likes and dislikes:

I have been using the Dia 2 at work now for several weeks, for taking notes on pads of file paper. It is a joy to look at and to hold. For a work pen, the ability to start immediately if left uncapped for a while, is appreciated.

If we were playing the “If you could only keep one pen” game, then currently this Kaweco Dia 2 would be a contender. It has very quickly become a daily companion for me. I cannot imagine getting bored of the classy design. For anyone looking for a well designed, well made cartridge converter pen that is smart and attractive enough to treasure but which does not cost a fortune, this is well worth considering.